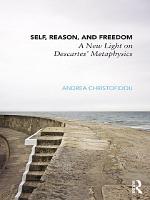 Book Description
Freedom and its internal relation to reason is fundamental to Descartes’ philosophy in general, and to his Meditations on First Philosophy in particular. Without freedom his entire enquiry would not get off the ground, and without understanding the rôle of freedom in his work, we could not understand what motivates key parts of his metaphysics. Yet, not only is freedom a relatively overlooked element, but its internal relation to reason has gone unnoticed by most studies of his philosophy. Self, Reason, and Freedom: A New Light on Descartes’ Metaphysics, by defending freedom’s internal relation to reason, sheds new light on Descartes’ metaphysics and restores the often dismissed Fourth Meditation to the core of his metaphysics as he conceived it. Implicit in that relation is a rejection of any authority external to reason. Andrea Christofidou shows how this lends strength and explanatory force to Descartes’ enquiry, and reveals his conception of the unity of the self and of its place in the world. Self, Reason, and Freedom: A New Light on Descartes’ Metaphysics is essential reading for students and scholars of Descartes and anyone studying seventeenth-century philosophy.